Lewis: And The Moonbeams Kiss The Sea 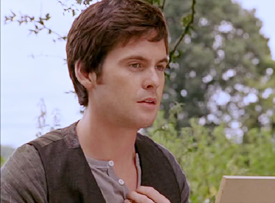 In the first film of the series Lewis (Kevin Whately) and Hathaway (Laurence Fox) are at Dr Hobson's (Claire Holman) birthday party: Lewis is bored and Hathaway is quietly drunk. Uniform police arrive at a house over the road and they use this as a handy excuse to leave. The house belongs to Dr. Stringer (Neil Pearson), a specialist in the Romantic poets, including the works of Shelley (from whose poem, Love's Philosophy, the film title is taken). Dr Stringer believes an intruder came onto his property, but doesn't have much to steal other than rare books.

Later, in the basement of the Bodleian Library, a maintenance engineer, Chapman (Darren Clarke), is found shot in the head. At Chapman's house, Hathaway finds nineteenth-century books taken from the Bodleian, even though it does not lend out its books. Chapman arouses further intrigue when it's discovered that he is a member of the local support group, Gamblers Anonymous, organised by maths professor Sandra Walters (Haydn Gwynne), a close friend of Dr Stringer. Then the brilliantly creative fine art student Nell Buckley (Emily Beecham) is also found murdered, and the most significant clue is a hand-written piece of Shelley's poetry found in her back pocket.

When a gun is found in the bed-side drawer of her house-mate and close friend, Philip Horton (Tom Riley), the two murders are connected. Philip, now the main suspect, is an obsessive painter with a photographic memory and an 'other-worldly' attitude to life. It seems his amazing talent lies at the heart of the mystery

Intrigue grows when the detectives find that another house-mate, Jameson (Sam Alexander), works at the book-makers where Chapman placed his last bet and is tutored by Walters, the organiser of Chapman's Gamblers Anonymous group. The net closes in on Stringer and Walters when it is found that they were running an elaborate scam: Chapman provided authentic texts from the Bodleian library, passed them on to Jameson and Philip, who would then unwittingly re-create them for sale, by Walters and Stringer, on the American antiquarian books market. When Jameson goes missing, Lewis and Hathaway think he could be the next victim, so the race is joined to find him before the murderer does. (from here)