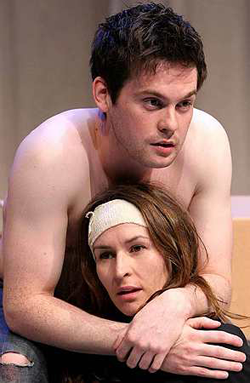 The play centers on the lives of Frank and Claudia who have been married 19 years and are packing their household belongings. Their move is complicated by the arrival of Romy Vogtlaender whom a teenaged Frank promised to love forever. Now she has returned to claim possession of her man. As Romy and Claudia both stake their for claims Frank, a Pinterish battle for ownership ensues via terse dialogue and cinematic-like bits of information and narrative that flash back and forth in time turning these relationships into a disquieting drama. A romance between Frank and Claudia’s teenage son Andreas and his teenage girlfriend Tina echoes Frank’s past relationship with Romy. In the end, Romy feels she must destroy all signs of Frank’s marriage in order for her bond of love with Frank to survive and to give herself hope for a renewed life.

Richard Wilson directs with exemplary, understated assurance, his strong cast bolstered by a promising professional debut from Tom Riley as Andi. The Telegraph