We know from Tom Riley and others on Instagram, that there was a cast read-through for ITV's crime thriller series Dark Heart last Friday, with a few interesting new cast members revealed. It seems poor Tom only gets to have a few days off after Dry Powder completed its run at the Hampstead Theatre, before filming starts on the 6 part series. According to writer Chris Lang on Twitter this morning, shooting begins tomorrow. Chris's tweet also revealed some more new cast members for the series. I understand that the 2 hour drama which aired on ITV Encore in November 2016 will be split in two, and added to the 4 hour long episodes they start filming tomorrow.

A recent issue of TV Satellite magazine mentioned Tom Riley and Dark Heart, but weirdly not Dry Powder which he was performing in at the time. 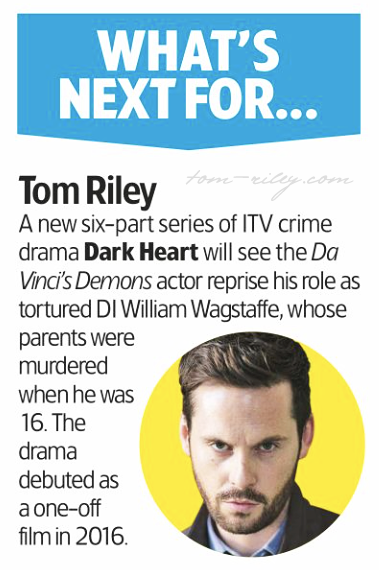