Home / Starfish: potent leads and measured direction
Submitted by admin on 24/Oct/2016
Origami Films uploaded a new music video for 'Empires', the end theme for Starfish, by James Keo and Sam Clifford. The video (embedded below), includes some new scenes with Tom Riley as Tom Ray. Starfish is released on Friday. 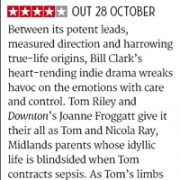 I recently asked if anyone could point me in the direction of the Total Film issue which has the great review for the film, as I couldn't find it anywhere. Sadly no-one was interested in helping me, but it seems that all those involved with Starfish had a heads up, as the 4 star review (right), can be found in the December 2016 issue of Total Film, only now on sale.

Two more reviews for Starfish have been shared online.

Bill Clark seems determined not to sugar-coat the reality of what Tom has experienced. A rare moment of triumph against adversity provides a climax that is all the more deeply felt because it has been so hard won. Starfish is commendably restrained, thoughtful and well-acted but that doesn't stop it being a tough film to endure. The List

As such, in spite of some solid performances from Froggatt and Riley, it’s hard to connect with their relentless suffering; it’s an inspiring true story. The Upcoming